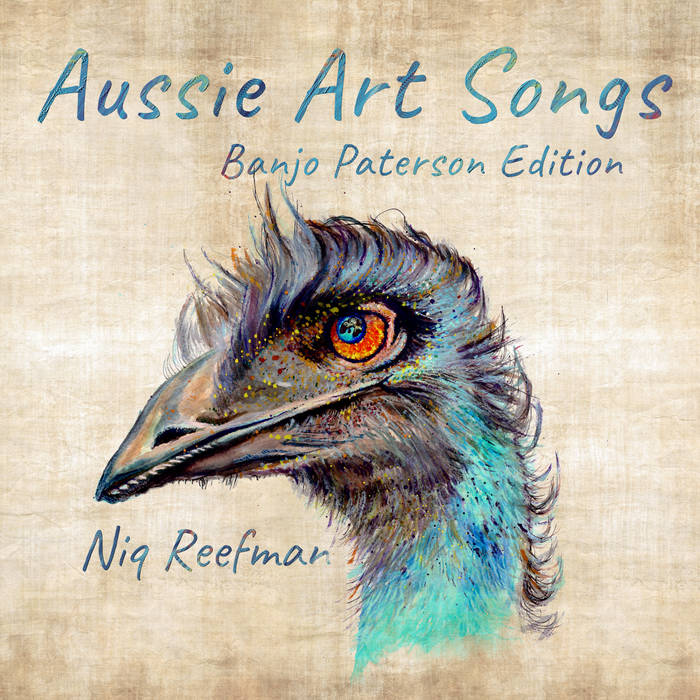 This album was a project that took around a year to complete.
Using the poetry of Banjo Paterson, I set music to it to reflect the text.
In very few instances, I took out a word to maintain flow of the music (Kiley's run) and added my own lines (the intro for Any other time)
Where the mood of the work has humor, the music emulates this (Bottle 'O)
Where the mood is dark and powerful, the music emulates this (Grey gulf water)
The creation of this album was also a challenge I set myself to play moving basslines & chords simultaneously on the left hand side of my digital accordion while either singing or playing trumpet with the right hand (essentially performing 3 parts simultaneously for live renditions).
Some brief notes on each piece are below:

Grey Gulf Water
An Evocative work about the gulf of carpentaria. There's no chorus in the poetry, so I made a haunting instrumental chorus, adding ocarina and whistling to it.

Bottle-O!
This is a humorous work about a man who collected recycled bottles to fuel his drinking habits. I incorporated beer bottles and jawharp to add to the sense of humor.

Lay of the Motor Car
We had lots of fun with this one, adding street sound effects and interrupting the last chorus with a little dialogue that Robbie (my drummer) brought some great humor to.

The Uplift
I wanted to create a lively outdoors soundscape to this one… I had an image of the 7 dwarfs whistling while marching off to the mine… So we recorded a men's choir for the choruses. Then in the studio, we decided to change the key for the last chorus and quickly realized the choir wasn't recorded to that pitch… So we tweaked them up a tone and… They sounded like oompa loompas… we loved it!!!

Sunrise on the Coast
This work describes the beauty of dawn and the emergence of the sun. The music starts in a minor key and when the sun finally appears in its glory - the key changes to major. I use 2 different instrumentals to keep each verse fresh.

Any other time (contemporary intro added)
One of the reasons I picked this one is because I feel it's relevant to current life…
Many of us feel too insecure to admit defeat or errors, and then too busy to give others our time or work on our inner selves.
I like how the chorus/subject line is only short. Each verse contains 3 of them and I changed the last melody line to lead into the instrumentals.

Old man platypus
When Europeans first encountered the platypus, they thought it was two animals sewn together, so I sewed 2 time signatures together. 7/8 - 4/4.
Then the challenge was to write a melody that was still catchy.
Again there was no chorus, so I turned one verse into a bridge, added some instrumentals and an improvisation.

A grain of sand (lyrics slightly changed)
Paterson traveled to Egypt as an honorary vet and a commanding officer during WW1 and probably found the inspiration to write this riddle from the landscape there.
I wrote the music to sound middle eastern, adding the percussive instruments known as the riq & tar.

Santa Claus
This is a conversation between Santa and a sentry. Santa is denied entry because he doesn't know the password… So I imagine the soldiers miss out on their presents that year…
To create a Christmas feel, I composed in carol style, adding bells when Santa sings, cathedral organ & choir for the last verse and a trumpet obbligato part.

Song of the Artesian Water (chorus slightly added to)
Holidaying at Dagworth station near Winton, QLD, (Also the place where he wrote ‘Waltzing Matilda’) Paterson recounted the drilling of an unusually deep bore (3335 feet) in this work.
The water came out at 90°C and spurting nearly 5 million litres a day.
Water management wasn't as stringent then as it is now…

Kiley's Run
It's interesting how the mood totally changes throughout this work. Starting with a cheerful nostalgia, it slides into a sigh and then a downtrodden recollection. It's about the good times and then the downfall of a cattle station and its owner. The music starts with a gallop and as the sentiment changes, the music slows and the melody becomes more melancholy.

Niq trumpets like a singer, keyboards like a bass player, sings like a narrator and ukuleles like an electric guitar - his musical performance is best described by picturing “Tim Minchin, flying a trumpet through a thunderstorm”.
He spreads songs of beauty, mirth, camaraderie, inspiration and action to a world that craves the social zest of an Irish pub and the hopeful melodies of nature. ... more

Bandcamp Daily  your guide to the world of Bandcamp

Guest hosted by Tamar Osbourn aka Collocutor and Toshio Matsuura.